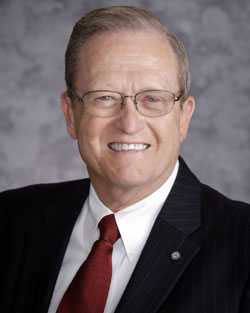 
Mayor Jerry Thorne is serving his fourth term as Mayor following two terms as a City Councilmember for the City of Pleasanton. Intimately involved in the Tri-Valley community, he has previously served on the city’s Parks and Recreation Commission for ten and chaired the committee twice. He co-authored the successful Save Our Community Park ballot initiative that resulted in the construction of three baseball fields at Bernal Community Park and chaired the Bernal Community Task Force.

Locally, Mayor Thorne represents Pleasanton on several significant , regional and city committees including the League of California Cities, where he sits on both its Board of Directors and as a member of the East Bay Division, the Alameda County Local Agency Formation Commission, and the Associated Bay Area Governments Executive Board. Mayor Thorne also serves on the Joint Powers Authority Committee of the Livermore-Pleasanton Fire Department, the Alameda County Mayor’s Conference, the Board of iGate, the Alameda County Transportation Commission, and the East Bay Economic Alliance for Business. He also provides leadership on four critical City Council sub-committees.

Mayor Thorne has a Bachelor of Science degree in Chemistry and Zoology from the University of Tennessee. Prior to a long and successful career in management with Hewlett Packard and Agilent Technologies, he was a Captain in the U.S. Army and the Army National Guard Officer Corps. As manager of global procurement and facilities design at HP, he worked directly with the City of San Jose to help streamline services to make the city more business-friendly.